From weeks to minutes… for real!

The first European CloudFoundry Summit was a blast. Swisscom developers were part of it and share their impressions.

Didn’t get the chance to attend CF Summit Berlin 2015 and learn how to deploy apps within minutes? Swisscom developers give you a short recap.

This week, the first European CloudFoundry summit in Europe took place in Berlin – at the heartbeat of the European startup community. Before the official start of the summit the hardcore of CloudFoundry met for an “Unconference” where small groups of 5 to 20 discussed their current topics. Swisscom participated and focused on how to run and produce CloudFoundry.

Day 1 – lightning talks about the power of CloudFoundry

The first official day of the conference started with hands-on training workshops about CloudFoundry in general, Bosh as well as micro-service architectures. Almost all 600 seats were taken and the whole day was a busy one.

The lightning talks were truly enlightening, including the one from Swisscom about how chocolate consumption correlates with Nobel prize statistics and why to you use the Swisscom Application Cloud. It was followed by a great reception and lots of people at our booth to learn more and get Swiss chocolate.

Day 2: Hands on – from weeks to minutes… for real!

The 2nd day of the conference was the real stuff. The foundation listed all the new members and hit the 50-member milestone with CA, Cisco, Citi, Hitachi, RBC, and SUSE newly joining. Dense information followed: how to run CloudFoundry, how to use it as a developer and how to best implement microservice architecture. Swisscom was also presenting their way of how we operate and announced the official support of Redis on their public PaaS offering. The use cases and technical tracks convinced.

The best wrap up is a quotation from Colin Humphreys from CloudCredo: “Cloud Foundry is not exciting. What you can do with it is.” You are  so right, Colin!

The CloudFoundry foundation was founded last year with known industry leaders like SAP, IBM, IBM, Intel, VMware, EMC as well as Swisscom. Swisscom is a gold member of the foundation and early adopter of CloudFoundry and one of the first providers in the world launching a public Platform-as-a-Service offering based on CloudFoundry. In addition to that, Swisscom was elected to be a board member to represent all gold members in the Board of the foundation – this is an important acknowledge of the community towards the commitment of Swisscom. Swisscom is also hosting and supporting meetups for Germany, Austria and Switzerland every other month.

It all started with a Well-Architected Review
Read more

Sensitive data in the cloud? We can lead the way.
Read more

Can we expect the next big thing?

A brief overview of what the top three technology companies are developing for the smart-home.

One month has already passed since we (George, Oli and Abi) moved into the Swisscom ICT WG. We have determined which ideas we will pursue for the next few months and are in the stage of doing market researches.

During this one month, we got in touch with different smart-home devices and applications from different manufacturers. But products from the big players in the technology industry were missing. With this blog entry, we would like to highlight what Apple, Google and Microsoft have been doing in the smart-home segment and what they have in their pipeline.

At the WWDC’14, Apple presented their smart-home app called HomeKit, which intends to bundle home-automation devices. Compatible devices can be integrated in HomeKit and can be controlled without accessing the app of the device manufacturer. The devices can then also be controlled over Siri or AppleTV.

Although HomeKit has been announced in 2014, the final version is not available yet. Only a trimmed version is available in selected markets. The reason for the delay is that device manufacturers need to fulfill strict requirements to get the compatibility certificate from Apple, hence many companies are still hesitating. But the first compatible devices reached the market this summer/fall, so we can expect the full version of HomeKit in the next few months. 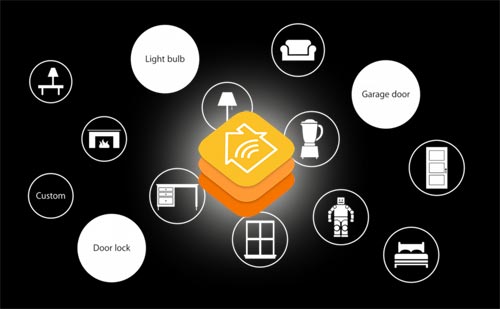 In 2012, Google announced Android@Home, but after a few months they stopped talking about it. Later in 2014, Google acquired Nest Labs and Dropcam and started developing devices for home automation. This spring, at the Google I/O conference, they announced Brillo and Weave that aim to standardize the home automation segment.

Brillo is an extremely lightweight operating system (OS) for internet-of-things (IoT) devices. It is a stripped down version of Android that supports Wi-Fi and Bluetooth LE and only needs 128MB disk space and 32MB of memory.

Weave is cross-platform language that simplifies the communication between Brillo operated devices, internet/cloud and Android smartphones.

Brillo has been released in Q3 and Weave is to be released before the end of the year. Both are free at disposal for hardware developers, who then can build their own software on top of them.

Microsoft acquired the smart-home app developer R2 Studios in 2013. In 2014 they partnered up with Insteon to develop apps for Windows phones. But already years before these occurrences, Microsoft Research has been conducting research on smart-home. One of the research projects is HomeOS, which was launched in 2010. The idea behind is to highly abstract IoT devices in order to provide a centralized, holistic control.

HomeOS can be installed on any Windows PC, which then serves as a HomeHub. All IoT devices in the home appear as peripherals connected to the hub and can then be intuitively found, accessed and managed. This high abstraction simplifies crosstalk between the devices to a high amount. This again simplifies app development incorporating devices from different manufacturers.

The HomeOS prototype can be licensed for free for non-commercial use. Microsoft uses HomeOS mainly to collect data, which serves as a foundation for IoT device and app development. It is unclear whether HomeOS will be released commercially eventually.

All three companies pursue the goal to centralize the control of a smart-home in an intuitive way, which is the next step in home automation. And they have chosen different approaches to reach it.

So it is certain that the next big thing will come, but if its from Apple, Google, Microsoft or another company, only time will tell!